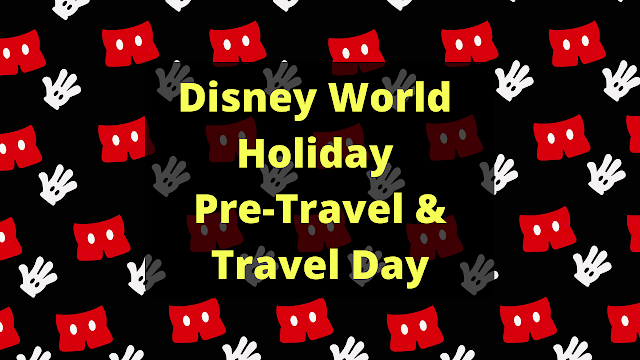 It had finally come around. 18 months previous we had booked our holiday to Disney World, and for the first time, we were staying on Disney World property. We were staying at the Port Orleans Riverside resort. Booking with Disney meant we could pay monthly which was a big help.

It actually came around pretty quick. We decided to stay in a hotel the night before as our flight was for 10:30am and we didn't want to have to drive for 2 hours super early in the morning.

We got a hotel and two weeks parking for £130. About 4 weeks before I got an email stating that the Jet parks car park we were supposed to be using would be closed for the winter.

They had informed me that we would be able to use the long-stay car park at Manchester airport for no extra charge.

I should friggin hope so!

This turned out to be much easier.

The kids went to school in the morning and we decided to pick them up at dinner and set off around 2pm instead of 4pm so we would miss some of the traffic at Leeds and then Manchester. It's around 2 hours to Manchester from Hull.

We were taking Kerry's little Fiat Punto as It's a lot better on petrol than my car. Getting the two suitcases in was a majorly tight squeeze. We got the big case in the boot. Just. The other case had to sit in between the kids. We had put another suitcase inside one of them for things we would be bringing back. God knows how that was going to fit in on the way back.

We were flying with Virgin Atlantic and they had just brought out twilight check-in at Manchester airport. This meant that we could arrive at the airport between 4-8pm and check all our cases in and get our boarding passes the night before we fly, saving us potentially a long wait queuing in the morning of the flight.

The car journey took 4 hours! Traffic was mental! It's a good job we decided to set off earlier otherwise we would have probably missed the twilight check-in.

Once we arrived at the hotel we had to find out where the short stay car park was. This wasn't too difficult and off we went to find the Virgin check-in desk.

We found it easily enough. Guess how many people were in the queue??

All checked in and boarding passes received within 10 minutes. Goodtimes. Now it was off to find the hotel. About 10 minutes later we had found it. It was directly opposite the hotel we stayed in 5 years ago on Runger Lane. We dumped our bags and headed straight out to Trafford centre for some food and trainers for Alice as the trainers we bought her for her holiday, that fit perfectly in the shop, were now, for some reason, far too big!

We had tea, finally found some trainers and got back to the hotel to get some sleep. This would be fun, as the kids were super excited.

Holiday tip: Don't tell your kids you're going on holiday until you get there.

Sleep did not happen. Joseph kept complaining of being too hot. Alice slept all night, thankfully.

We woke up around 7am. Kerry and I were nakered after hardly getting any sleep. We headed down for breakfast (that we had paid £20 for the night before) but we didn't really fancy anything. We just wanted to get to the airport so we could relax properly. The kids had some food which was the main thing and off we headed. 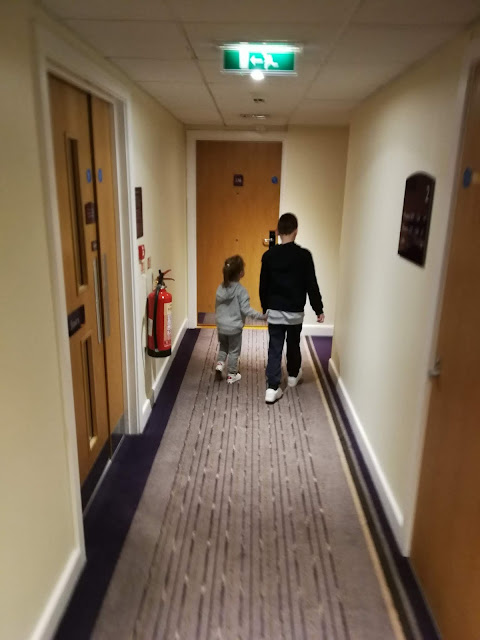 It was pissing it down!

We need to try and find the new car park we were staying as the description given wasn't overly helpful. It turned out that the car park we could park in was the same car park we parked in the previous night. This car park was called T2 West car park. Why that couldn't have been put in the email, I'll never know. All the road signs called it T2 West. It showed lots of spaces on each floor. We finally found a normal car space for us on the very top floor.

Off we went to the security check-in. We had paid £5 each online to go through the fast pass security as we had done this 5 years ago and it was a breeze. We were through within ten minutes. 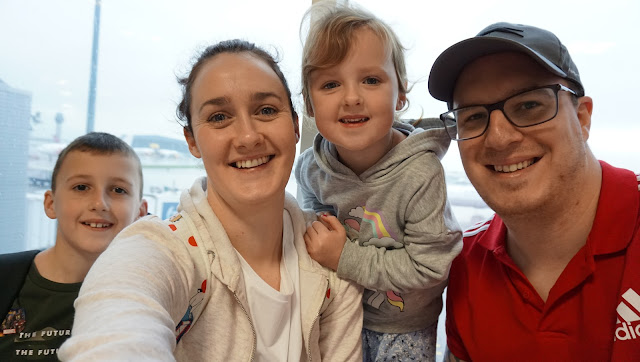 This is too straightforward, what's going to go wrong?

The flight was scheduled to be 9 hours and 40 minutes. Ughhhh! We had plenty of movies to choose from and we had packed the kids up with colouring books, some toys, tablets and such to keep them occupied.

They were very well behaved on the way there which was great. 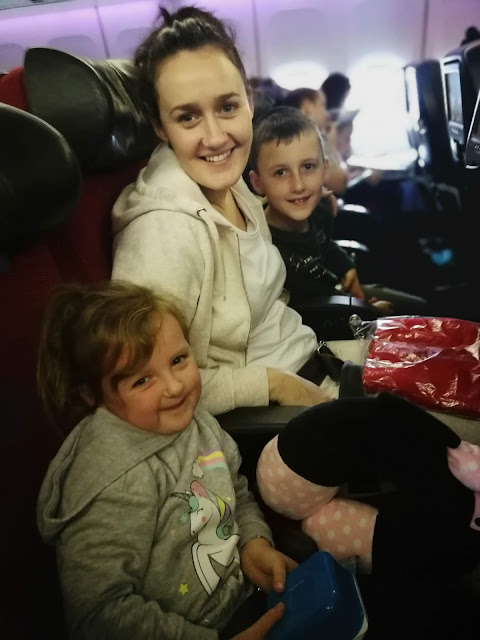 The food on the flight was nice, considering it was aeroplane food. They also kept coming round and offering us drinks, we could get alcohol for free too but it was too early for me.

The flight ended up being delayed by an hour on the tarmac for some reason. Once we were off it went fairly well. No real turbulence and I managed to watch most of Avengers: Endgame. Kerry thought the flight went fairly quick but it seemed to drag for me.

Once we landed we got off the plane and went through security. Everything went smoothly. Once we collected our bags we headed off to find the Disney Magical Express to take us to our resort.

The bus journey took around 45 minutes as there were a few stops before we got to our resort. 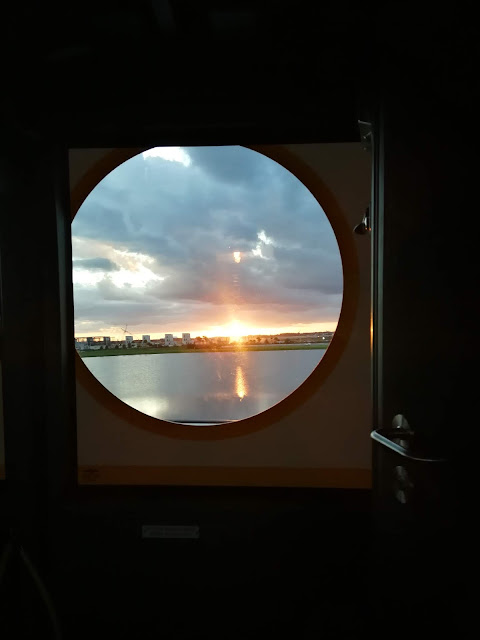 It was dark by the time we got to the hotel and had checked in. We could get somebody to take us to our room on a little golf buggy so we decided to go for this. The resort was massive so It's a good job we did this as we would have never found our room in the dark. I'll write a separate post about the resort once I've got through the holiday posts.

We got into our room around 7:30pm and dumped our bags and headed off to find the boat that would take us to Disney Springs as we were starving and we were all shattered. It was 12:30am the next day in the UK and the kids hadn't slept yet. 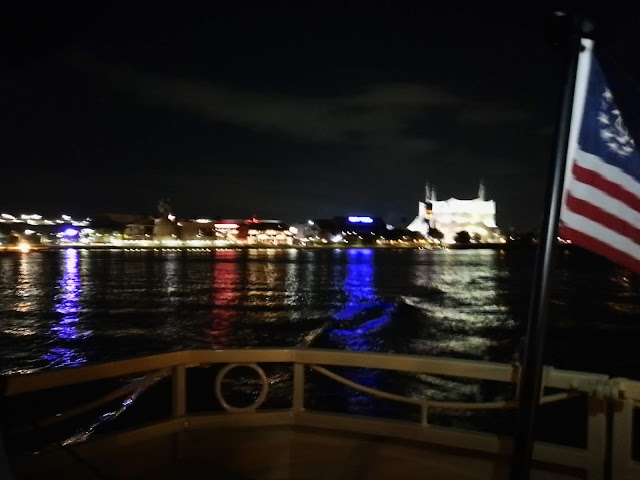 Off we went on the boat journey which I really enjoyed, it took around 30 minutes as was a nice change instead of going in a car like we have done previous times. We had heard great things about Blaze Pizza so we went and found that and had pizza for tea. The pizza was made in front of you and could be used on your Disney dining plan so it didn't cost us any money.

We had a quick look in the Disney shop and headed back to the boat and back to the hotel. Alice fell asleep on the boat on the way back. It would have been around 4am UK  and none of us had slept. We put Alice straight in bed and joseph got changed and got in bed too. He was asleep within 2 minutes. 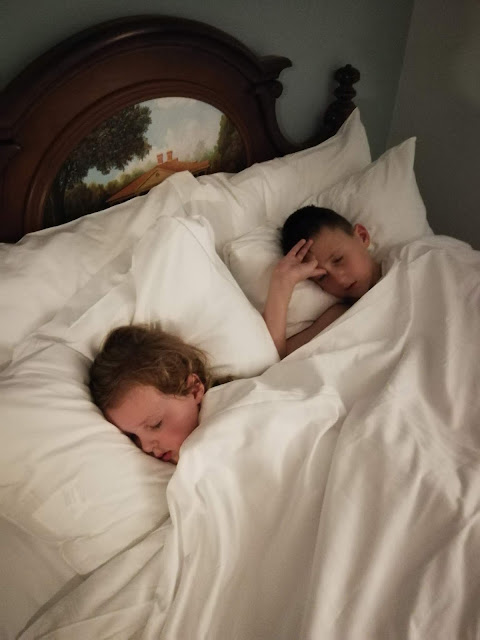 We unpacked all the cases and then got in bed ourselves to get some shut-eye before Day 1 starts.