Is Shopping By Gender Really A Big Deal?

on November 07, 2018
This week I came across a Twitter post that called out Matalan for the way their Christmas jumpers are gender specified. The post stated that Matalan "need to drag themselves into the 21st century and let kids be kids and wear what they like". So I asked myself...

The main issue was that a jumper which had Santa and a dinosaur on it had a label that said "boys" and a white jumper that had #santasquad on it said "girls. The problem being brought up was, that girls like dinosaurs to and boys like white.

After reading this comment my first thought was, "Are Matalan deliberately trying to cause offence here?".

No, I'm pretty sure they weren't. After all, they are retailers, they have suppliers who no doubt use that specific label on plenty of other things. The person who raised this issue didn't see why he had to walk to the boy's department to get this jumper for his girls, the jumpers should have been together.

This point I agree with. Partly.

I do think that Christmas jumpers or anything particularly seasonal should be put together so they are easier to find. What I don't agree with is, is there not being a specific section for boys and girls or men and women.
Now that that bit is out of the way...

I decided to run a twitter poll to see if I was the only one who felt this way about gendered sections in shops, which I suspected I might be. This being 2018 an all. 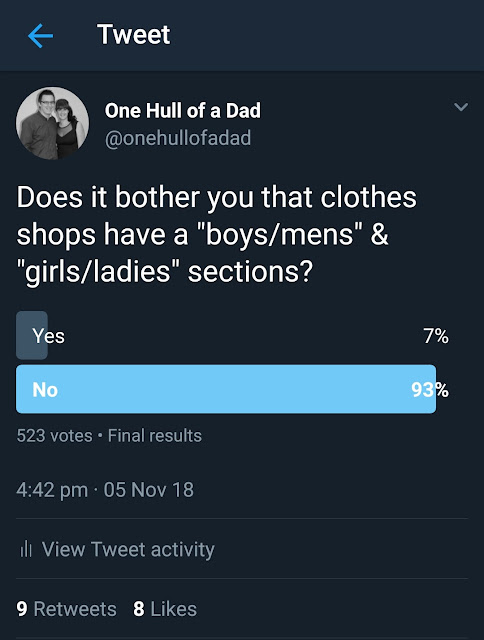 The results speak for themselves I think. This isn't to say the person who wrote the original tweet is wrong, of course not. Everyone is entitled to their own opinion and I respect their right to have one. For me, it just doesn't matter. I will walk to a different area of the store to get my child something that they want and I don't particularly care what that section is called.

What came out of this poll was that whilst a lot of people weren't bothered by calling departments boys or girls, as it makes shopping easier, it did bring a fair few people who would like to see a unisex section. After all, there are plenty of clothes that both sexes can wear. If you identify as a frying pan one morning, I'm sure there'll be something for you too.

It also showed that some people genuinely believe that 2-year-olds can be fully aware they are the wrong gender. Can a 2 year old be aware of this? I personally doubt it but I'm no expert. A massive row erupted over this  because there are certain people out there that cannot simply accept other people's opinions and that their way is the right way.
I think some people should stop using children to further their own agenda (I don't mean the original twitter post here). Let kids be kids, sure, but let them do it without clouding their mind with all this crap. After all, you're the one that has the issues about it. Your kids have no idea. They just want to wear a jumper, climb a tree or whatever else they choose to do. I am glad to see that most parents aren't like this.

As we all know, male and females bodies are completely different and most of the clothes made are to suit this difference in body shape, hence the departmentalised areas. I personally, don't want to have to walk through tons of strappy vests and skirts just to find a t-shirt that is going to fit me. I want to be able to go straight to that area and know that the top is made for a man and not a woman. I don't want to have to waste my time trying something on to realise it is made for a woman's body shape. I shop quickly, I know what I want, I go and get it, then I pay for it and leave.

We have already seen places like John Lewis and Next try the unisex selections, they clearly wanted the good press at the time and well done them but, this has clearly not made them enough money as they are either shrinking rapidly or now non-existent in most stores.

Does it really matter and will it ever change?

To me, no, it doesn't matter. I don't care. Will it ever change? Probably not, unless the masses demand it, it is going to stay as it is. This is what makes companies money.

Are you bothered by gendered labels in clothes? I don't believe a label confuses children or anyone else, the confusion comes from how they are taught to look at these things. 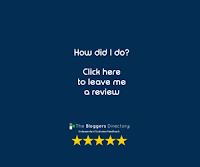 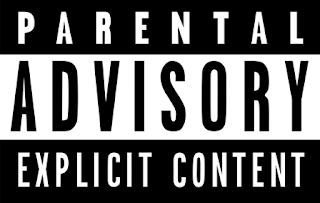 A new swear word was born

*WARNING!* This post contains words or phrases that some people may find offensive. If you are sensitive to swear words then please don't read any further. Feel free to share it though as plenty of others love a good swear word.

A week or so ago i decided that my swearing vocabulary needed some new additions. How was I going to bring these new additions into my life? By asking everyone on Twitter of course!


Remember if you get offended by swearing don't read any further! So here goes, here is the list of all the swear words that you guys gave me! Thanks for all your input, it was one of my most engaged tweets for a while LOL! Feel free to use any of these in your daily life.
FuckadoodledoCockwomble (my favourite!)Wank stainBastardoCuntychopsFuckeryBellendSmurf dicked tree fuckerDonkey fucking bag of ball sweat (thanks Jeff for that one, used it already!)BollockschopJizzbucketMillions of sperm and you won?!Twatty BolloxCunty McDickslapTwuntCuntflapDick SsplashTwatbadgerFuckta…