on July 21, 2018
Today we had the opportunity to go see Bing live. Now, parents, I know what you're thinking, why would I do this to myself? Well, the answer is simple.

Alice loves Bing, and I love Alice more than I dislike kids TV shows. It couldn't be that bad right?

I was contacted by Bright Media to see if I would like to take my family to go and see the show, as Kerry and I were talking about taking Alice anyway, this seemed like a no-brainer. I got back in touch and said I would be delighted to write a review in exchange for the tickets.

We got there today and we had the tickets and a free drinks voucher each, which was a nice surprise, and a welcome one as it was boiling outside.

The excitement is building

Alice had been excited about going to see Bing for about a week, she had found her Bing teddy and wouldn't let it go. Joseph enjoys seeing shows but isn't a huge fan of Bing. He said the other day that he didn't want to go. We told him he didn't have to if he didn't want, he replied, "No, I'll go, I'm not going to let a spare ticket go to waste". I didn't realise my 6 year old had turned into a 36 year old. 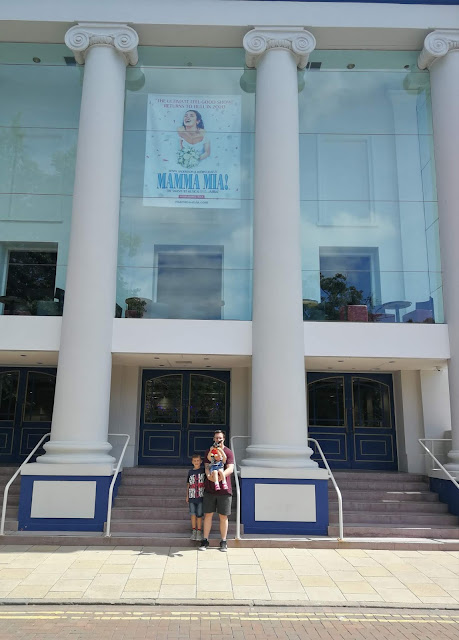 I haven't been to Hull theatre since I was a little boy and I know that it had recently had a refurbishment. The place is impressive, inside the theatre we went to take our seats, if you've ever been to Disneyland and have seen a show, this theatre would remind you of those. It was well laid out, we didn't have to see the back of somebodies head throughout.

What actually is Flop?

Its the question us parents have all asked, what the hell is Flop? Now, I know he is Bing's carer but, just what is he?? To me, he looks like a peanut, but a talking peanut, that would be ridiculous. Does anyone know what he is?

Once the show started, Bing came out. I was immediately surprised. I was expecting someone dressed in a Bing costume but this wasn't the case, they where giant puppets that were controlled by people who you could see on stage, they also voiced the characters as they went. Maybe this is standard in kids theatre shows but it was not what I was expecting. I wasn't sure how this was going to go.

As the show progressed, the kids in the audience grew louder as the show went on, there were times when Bing and his friends would get the audience involved by asking them to make sounds or dance etc and the kids loved this. I could see Alices face and she was loving it. 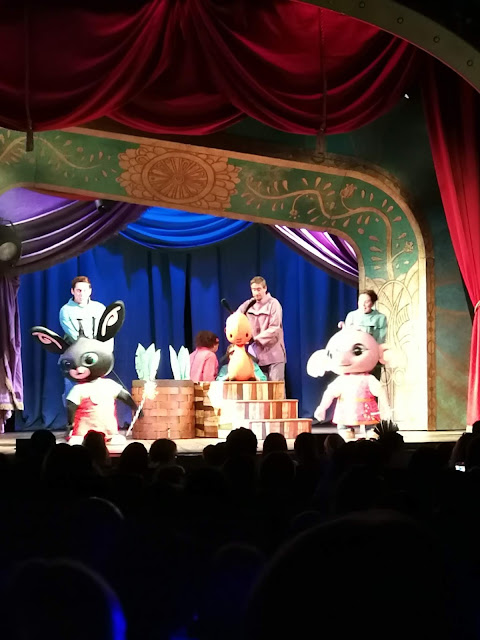 After about 20 minutes of the show, I could see Alices excited face. I could see her clapping. Then she asked where Pando was? Uh oh, it seems that Pando is Alice's favourite. Where was he? Pando had been mentioned but had so far failed to make an appearance. Then we had an interval. Oh lord. I thought it was about to kick off. Thankfully, Alice decided she needed a wee and had forgotten that Pando hadn't come out yet.

After the interval, there was some dancing to be done and Pando finally made an appearance. Even in the dark, I could see Alices smile. She was loving it.

Alice loved it! Joseph said he liked it but he did seem a little bored, but then he is a 6 year old boy who is now into football and wrestling rather than cartoons so I can understand this, It was great to go out and see something like this as a family.

Is it worth going to see?

Yes, if you have a small child who likes Bing then they will love this. I think the perfect age is between 2-4 years old. The theatre wasn't full but there were still lots of people there. The theatre isn't something we do as a family really so it was great for us to do this together. I will certainly be looking to take the kids to something else in the future. This was also good practice to see how Alice might react to going to the cinema. I think she's ready for that too now.

"The CBeebies favourites are brought to life in a brand new stage production full of fun, laughter, music and magical puppetry.  Bing Live is the perfect first theatre trip for pre-schoolers and their families.  Going to the theatre… it’s a Bing thing!

Bing Live is produced by Minor Entertainment (In the Night Garden Live) and directed by Will Tuckett, guest principal character artist of the Royal Ballet, whose production of Wind in the Willows won an Olivier Award for Best Entertainment in 2014.

The show will also bring together a first-class creative team.  Bing Live is adapted for the stage by Helen Eastman with costumes and puppet design by Tahra Zafar.  As Head of Costume, Hair and Make-up for the Olympic and Paralympic Opening and Closing Ceremonies staged in London, 2012, Tahra managed the production of 23,000 costumes for all four Ceremonies.  Her film projects include: Star Wars VII The Force Awakens, X Men-First Class, Harry Potter and the Philosopher's Stone and The Fifth Element and for television: In the Night Garden, Zingzillas and The Adventures of Abney and Teal". 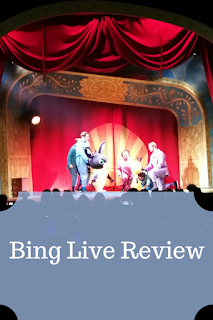