As you can tell that was more of a statement from my wife than a question. That was about 3 weeks ago, today is that day. 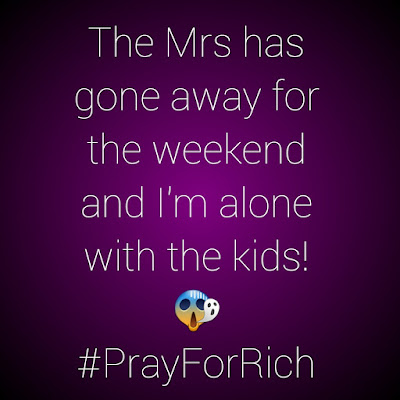 The kids are now in bed, here is how the day with the devil children went...

Breakfast was straightforward, coco pops for Joseph, star-shaped cereal for Alice (No idea what it's called and I couldn't give a shit). Oh no wait a minute, she doesn't want It. She wants to throw it at Joseph instead. Good times. Alice also enjoys karate kicking Joseph on occasion or just randomly smacking him. She's lovely.

When a guy is looking after his kids for the weekend whilst the wife has a much-deserved rest, what is he meant to do? Social media it of course! So I gave Insta stories a go.

If anyone has a blog post on how to actually use  Insta stories properly please get in touch as it makes no sense and the instructions on Google are crap. Either that or I've lost my tech savviness in my old age.

The first story we did was a quick hello, I said hello, Alice said hello, Joseph said "Burgernips".

#BurgerNips was now on my Insta story. The next part was of Alice and the destruction around her.

How can something so small cause so much mayhem??

I didn't actually add any more to the story throughout the day because, well, my kids were here.
I decided the best course of action was to take them to a local shopping centre and get them a colouring book each, then go to the park, have a wander around and also a look at the animals to pass some time. The weather was supposed to be crap today, instead, it was sunny. The weatherman for England is really earning his money at the minute!

Shopping and park passed without incident. I had promised Joseph the other day (I say promised, I mean bribed) that, if he was good all day today he could stay up for an hour and play PlayStation or SNES when Alice goes to bed. I genuinely can't remember the last time Joseph was good when I was at home so this is the reason I wasn't looking forward to today. And tomorrow! Oh god, I forgot about tomorrow!!

I cooked some sausage rolls for dinner (get me, cooking and looking after kids!). We all had one, apart from Alice who thought she would eat 20% of her sausage roll and put the rest of it in various places around the living room!

When is it tea time??!! Tea time means nearly bedtime, oh how I can't wait for bedtime. 2:30 pm to 4:30 pm went so slow, I'm pretty sure all the clocks were ticking twice forward and once back! It's a conspiracy I tell you!

Had Alice done a chocolate snake in her nappy? I asked, and smelt! My eyes watered!

"NO! WEE WEE!" Came the reply. I rebuttled with "No, a poo poo". She repeated at the top of her voice "No, wee wee". This carried on for a further two minutes until I thought I might as well actually check...

Tea time consisted of the same as breakfast and dinner. Alice throwing food everywhere. Joseph ate all of his and had been a good boy all day. A few cuddles all round from Alice, she was getting tired.

"Had" I hear you say to yourself. That's right. Now comes the attitude and answering back.

Kerry rings around tea time after texting to say "I'm missing you all". Yeah, of course you are. You get two days away, kid-free, don't pretend like you're not doing what Macauley Culkin does in Home Alone when he realises he is on his own! I know your game love.

Alice was upset that mummy was on the phone and not with us. Then I was upset as, when I ended the call I noticed a giant crack across my phone screen. For fuck sake! I got Alice ready for bed and let her sit on the couch and watch Teletubbies for a bit.

Fuuucck! I know she does it on purpose!

Yep, this time she had done a poo! It did not smell of roses.

Off I take her to bed. Now its PlayStation time with Joseph. Fifa 15 is the chosen game. His choice, not mine. I have two kids so cant afford a newer version. We did some practicing first as he has never played on it. He wanted to practice some free kicks. Now, if anyone has ever played Fifa you will know that free kicks are quite hard.

Once he was in bed I ordered takeaway! Boom! Now to just sit and wait for Alice to wake up 316 times through the night! Woop!