5 reasons a child should try Karate

on August 10, 2017
Joseph has been learning Karate for 5 months now. Around 6 weeks ago he had his first grading and passed to earn his Red belt. He was very chuffed! Karate has been great for Joseph and it is something that he really enjoys. He is one of the youngest there at only 5 years old but he works hard. 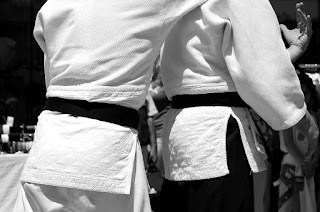 Joseph trains with the Hull & East Riding Karate Academy under the guidance of sensei Wayne Clark. We aim to get Joseph there twice a week to train. His next grading will be for his yellow belt.

Have you been thinking about getting your children into Karate? here are five reasons as to why I think it's the right thing for any child to do:
Joseph has really come on in the five months he has been doing it. He genuinely enjoys going and loves to practice with me in the garden. He especially loves to teach his one-year-old sister how to karate punch!

His Karate class have a competition currently to win a new Karate suit, they had to make a video of them training. The winning videos will also be placed on the Karate academy's website. You can see Josephs video below that was made by his uncle. It truly is an amazing 2-minute video. Joseph loves to see the views go up so please have a quick watch!

Thank you for watching!

Karate really is a great thing for boys and girls to take up. I took up Karate when I was younger and managed to get to Blue belt before hitting my teenage years and deciding I didn't want to do it anymore. As I watch Joseph it brings back the memories and I love being able to help him out which gives us some great time together.