"Never" and "is it fuck" are my answer to those two questions. They are of course asked in relation to having more children.

More? More of them? But I already have two!

Off with my nuts then! 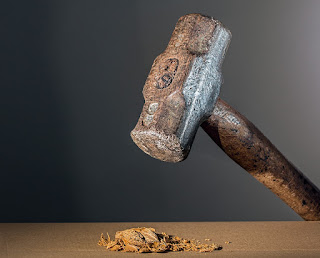 I declared this when the hospital refused to sterilise the Mrs after the birth of our second and final child. Apparently, both of you being adamant before the baby is born that this will be the last one isn't good enough.

We both talked about the fact we don't want any more children. The Mrs had a bad pregnancy with our second and had to have surgery after the birth of our first so we knew our feelings. We love our children more than anything but we wouldn't be able to cope with more than 2, Financially and mentally. With two we can do all the things we want to do and we both always said we would like to have just two children. And a Mercedes.

Sadly we don't have the Mercedes yet. #sadtimes

"I'll get booked into docs on my week off," I said once Alice was born. Alice is 2 at the end of September and I've only just been to tell the doc I want Ronnie and Reggie neutering.

This isn't because I'm scared. I'm actually more scared of getting the Mrs pregnant again. It's mainly due to the fact I want to get the most out of my docs appointments so I like to go with a list of ailments so not to waste their time. I haven't needed to go to the docs in almost two years, which is why when I came down the stairs the other day, the Mrs said "I've made you an appointment with doctors"

I had already read up on what happens to your boys when you have a vasectomy so I was happy enough that I wasn't going to be shocked by anything the doc would say to me. I knew this trip to the docs would only involve me telling the doc about wanting a vasectomy and him putting me on a waiting list somewhere.

That still didn't stop me from giving the lads a motivational speech whilst getting ready that morning.

Before I went the Mrs was giving me lots of "advice" on what to say of the doc tries to talk me out of it etc. I should point out at this point that I am 30 years and have been talking to adults for a number of years, admittedly I haven't been talking about de-juicing Bonnie and Clyde to anyone, but still.

"I know dear" was my reply. Nobody can talk me out of doing something if I have made my mind up so the conversation with the doc was only going to go one way.

Off I go to the docs. I'm sat in the waiting room and I hear a faint crying sound...
"That's not my nuts crying is it?" I thought to myself. Turns out, no it wasn't. It was a small child in one of the rooms further down the corridor.

My name was called, "Richard Sayers, room 1 please". Dr Kelly his name was. I feel like this is something I will remember for the rest of my life, after all, it's not every day you talk to a stranger about your two veg.

I sat down, he had a red jumper on and one of those sleeveless jumper vest things over the top of it, kind of reminded me of Chandler from Friends. Anyways, I asked If I could be put on the waiting list for a vasectomy. He said that wouldn't be an issue, he asked if I was sure about not having another child, have I discussed with my wife? How long have I been thinking of this? When I replied "I was supposed to come two years ago" he smirked and said, "I see". Classic doctor phrase.

He asked me if I had read up on the procedure and I said I had. He then told me that they would make a humongous incision (his actual words might have been "small incision") and tie off at two ends, I would be in and out the same day once I have my appointment through.

You can't do heavy lifting for a while etc after the procedure and you are still fertile for up to 12 weeks. After which you have to take a sample in for them to check that the procedure has worked.

A piece of piss I'm thinking to myself. Apart from the sample into a tube and taking it back to the docs part.

"Here you are love, where shall I stick this?"

Is probably not something I will say. I hope the tube isn't see through though!

I will be writing the next part of this post once I have had the procedure. I doubt I'll be allowed to blog it live so you will just have to wait for a few days.

It all sounds straightforward and if there are any blokes out there who are a bit nervous about going to the docs about this, then don't be. By all accounts, it's a very quick procedure and you're under local anaesthetic so you won't feel anything, other than several pairs of eyes and the doctor's breath on your nuts whilst the procedure is being performed.

Have you had this done before? How did you find it?

*EDIT: You can read Part 2, Part 3 and Part 4 by clicking the links. I have now had the vasectomy, all my thoughts and how it went are in these posts.