on July 18, 2017
With the summer holidays coming up, there is always that dreaded thought, "What are we going to do with the kids for 6 weeks!" That's right, 6 weeks! There are plenty of places to go in this country and there are lots of theme parks. One of the theme parks I've wanted to go to for a while is Diggerland. This is because, one, I'm a bloke, two it has diggers. What other reasons could there be? 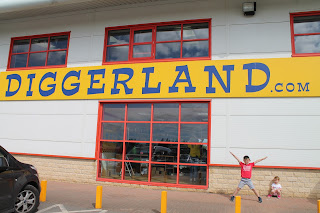 Being a Digger when I grow up has always been an ambition of mine since I was about five. Naturally, when Diggerland got in touch and asked if we would take some complimentary tickets and write a review of their park I took a moment to think about it (and by that I mean 3.2 seconds) then emailed back saying I would love to.
Diggerland is about 50 minutes down the road from Hull which was good news. It opens at 10 am so we set off about 9 as we wanted to get there for them opening.  Upon arrival, we were met by some "Digger operators" who had strangely large heads. 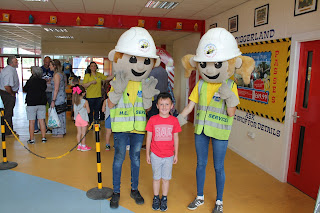 There was plenty of parking and it was filling up nicely just before 10 am. We got through the queue fairly quickly and then headed outside into the park. We were greeted by a "Little Tikes" section on the right straight out the door. 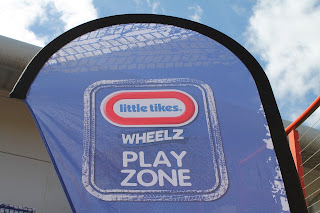 Alice quickly shot over to this area to play with all the cars and water pits. Joseph was having a good time with the water also. With it being a boiling hot day already this was a good start. 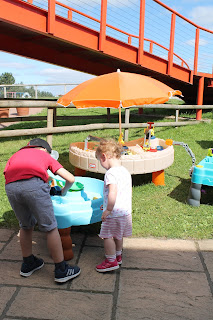 The only thing that put me off this area was on the picnic table that was situated next to this area. A plate was let on the table with a knife on it. Considering we got in the park as it opened I knew it couldn't have been left by a customer, or it was left from the night before. This was still there when we left later that day. Thankfully my children were too busy playing to even notice. Alice had fallen in love with a car and was refusing to leave it, even though we have the exact same one at home! 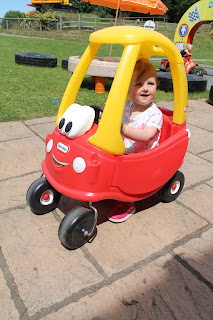 Once we peeled Alice and Joseph away from this area we made a start around the park. You could see, as you might expect, lots of Digger related rides. Looking at the park as we walked in I thought, is this it, we'll do this in an hour. I'm happy to say I was wrong! There were plenty of little cars that children can go on which they can drive themselves or there are somewhere they can go on with an adult. Joseph loved going on the cars by himself.

There is a height restriction on most of the rides and thankfully Alice was just big enough to go on most of them. One of Josephs particular favourites was the Skittles ride. You sit on a digger and use the controls to knock over skittles. I didn't think he would be able to do this on his own with him only being 5 but he did very well, better than some of the adults. 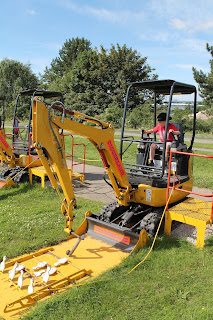 Further down there was a similar type of ride but instead of knocking down skittles you had to dig and find 3 bricks. I took Alice on this whilst Joseph went on one on his own. I don't mean to brag (well I do, obviously) but I found the three bricks in what clearly would have been a record time. Some people were taking 15 minutes plus. I don't think I even got 5 minutes before I was done! Boom! 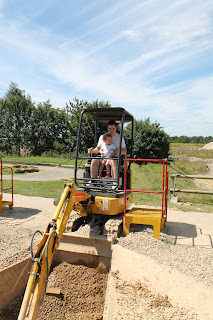 After lunch, we decided to go on a sky shuttle. This took us up high into the air. It didn't look that high from the floor but once you were up in the air we realised just how high it was. We thought the kids would hate it but they loved it! It was the Mrs and I that were papping our pants! 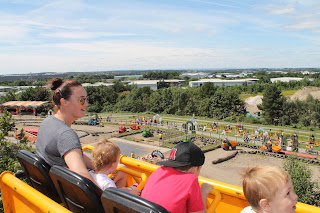 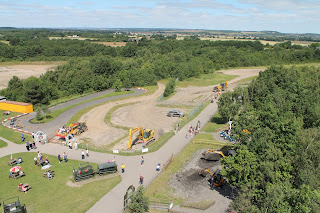 After the excitement of being ten thousand feet in the air, we decided to take the digger train. This was just a short journey through the trees and back but this relaxing ride was just what we needed plus there were lots of dinosaurs hanging around which is always good.

Around 2 pm we had done everything we wanted to do outside so we headed inside so the kids could play in the soft play section for a little bit before we went home. This area was a lot bigger than I expected and the kids loved it. It was a great end to our trip. 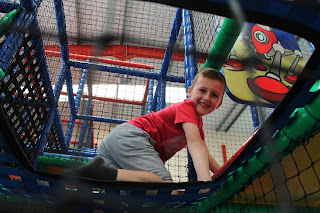 I asked my son Joseph what his best part of Diggerland was?

What more evidence do you need to hear from a child to know that the day was a success?

We were given free tickets to review the Diggerland park in Castleford. All the opinions have been our own