You don't mess with Nanny Plum

on June 20, 2017
Last week I was turned into a frog on Twitter by none other than, Nanny Plum! It was a tough time I must admit. I got through it with copious amounts of biscuits and coffee. I still have flashbacks almost a week after the horrific event. I didn't really deserve it either! Probably.

It started with a simple statement...

Nanny Plum is if you don't know the sassy and opinionated Fairy in Ben and Holly's little Kingdom. This is the only kid's show that I actually enjoy watching (Nanny Plum, if you read this I obviously like Peppa Pig too and Miss Rabbit is totes the best character). 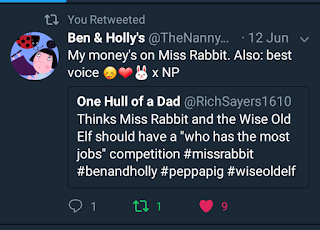 If you don't want to upset Nanny Plum, you probably shouldn't mention the obvious sexual tension between her and the Wise Old Elf, that's when she starts to get a bit threatening. 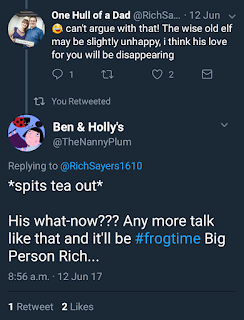 It's then, probably not wise to use her own catchphrase towards her! That's when it happened. 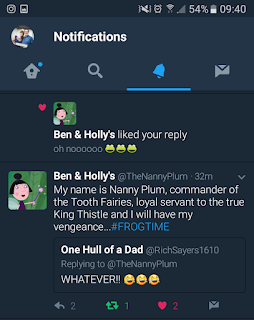 So, if you don't want to be turned into a frog by Nanny Plum, do not, I repeat do not

Other things that are likely to annoy her are:
Subscribe to One Hull Of A Dad