Who says you can't have fun for free?

on May 29, 2017
This weekend the weather was gorgeous. Sunburn weather. Living in England you have to make the most it. We decided we wanted to do something that wouldn't cost a fortune but is something a little different than our normal routine. We decided to go to the Humber Bridge Country Park or "Little Swiss" as it's nicknamed. 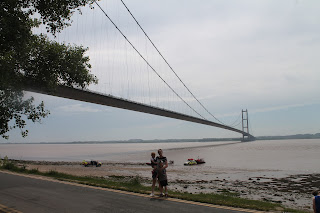 This is a place near the Humber bridge that is full of trees, a pond, places to sit and eat, play football (or whatever you fancy) and you can also get onto the foreshore and walk underneath the Humber Bridge (which was the longest single span suspension bridge in the world when it was built).


Best thing of all is, it's totally free. We took a packed lunch so we could have a picnic. It's a fair walk around the place if you don't go down all steps, which we couldn't because we took the pram in case Hurricane Alice needed a kip. We had the fold the pram up down one set of steps as there was no alternative but the rest was great and the exercise did everyone good. 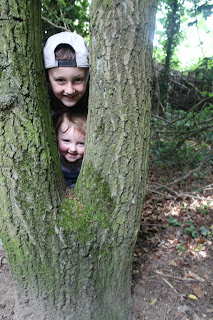 All of the last week was boiling! Which makes a change as usually when I'm off work it rains. We don't cope well with the sunny weather in England, we moan when it rains all the time then when it's hot we moan that it's too stuffy and moan that we can't sleep. Now I'm, not one to break a stereotype so I had done a weeks worth of moaning about it being too hot to sleep, so imagine my delight when it started to rain! We all had shorts and t-shirts on which was a bit unlucky but as we were covered by hundreds of trees we barely felt it. It did cool us down though.

Joseph and I had an epic stick fight reminiscent of Luke Skywalker and Darth Vader's duel in Star Wars. Needless to say, I trounced him! 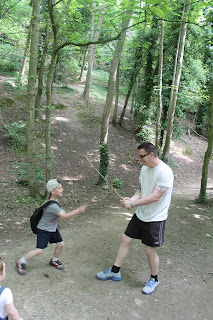 As you walk around there are a few signs telling you what the trees are and Joseph took great delight in reading them and asking me what the trees were called. Now I'm no treeoligist so most of my answers were my go to "oak tree". Sadly I was wrong on all accounts. The only tree I knew was the Holly tree. Go me! Think I need to brush up on my tree knowledge, probably do that another day though.

Afterwards, we went to a local dogs home for a look round. We're not going to get a dog for a few years but we want to get the idea into the kid's heads now so they aren't frightened when we get one likeIi was when my parents first brought a dog home many years ago.

After the dogs home, we decided to go up to a place called North Newbald, this is a lovely small village and where my grandma lived for many years. I spent quite a bit of my time there when I was little so I wanted to show Joseph and Alice where Great Grandma used to live. We also visited my Grandad's grave. I haven't been for several years so it was nice to go. Alice was asleep but Joseph got to see it. If it is possible I do hope my Grandad was looking down so he could see my kids. I do wish he could have met them.

We walked back to the village and sat outside a local pub and had a drink. Alice was still asleep! There were a few clouds coming over so after the drink we decided to head back to the car. Good job really as soon as we sat in, it started to thunder and lightening!

We all had an enjoyable but tiring Saturday. It was nice to get out with all four of us in some nice weather for a change. 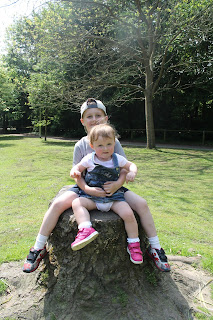 What do you enjoy doing as a family that doesn't cost the earth?