on May 18, 2017
The Mrs and I haven't been out together for a meal or night out in over four years. Last Saturday we decided that we would go out for a meal. We managed to get the kids looked after! Happy days!

I was at work until 5 pm. Art the start of the day we still weren't sure where we were going to go for a meal. We wanted to try somewhere we haven't been before seen as though this was our first meal out alone in years. We had a few places in mind and whilst on my break at work I checked a few places out on social media.

I checked out a place called Rebels, it is a smokehouse situated in Beverley, a town about 20 minutes away from where we live. The photos on Instagram of the food looked amazing. Some of the meals were huge. I had to try this place. I got the Mrs to have a look and we decided we would book at table for 7 pm.

Queue mouth watering all day at the thought of those amazing photos. Some of the burgers looked huge, it would be like eating my own head. That's how big they were. I left work at five, got home and changed and at 6:30 pm we were on our way.

Rebels is a fairly small place but I had heard good things. We arrived about 6:50 pm and our table was ready for us. The restaurant felt like it was a revamped house and were in the very small front room. This room had four tables in, one of which seated at least six people. I was immediately put off by this due to it being very small. I don't like to be so close to other people in a restaurant that you can listen to every word they say.

The decor of the place was very quirky, with lots of quotes on the walls from various people and retro style chairs etc. We perused the menu and I nearly shit myself when I saw the price of some of the meals. £47+ for one meal! Granted it was huge as I had seen the photo on Instagram but I was hoping to get the whole meal for less than that price.

We settled on a hot dog with pulled pork and cheese for me and a chicken hoagie for Kerry. Whilst we were waiting for food we both had a read of the quotes on the wall and got to know that the guy on the table opposite was "being a prick". Goodtimes.

The place was packed, I am glad we booked a table online (which was very easy). There were people queueing out of the door to get in. With the prices I have mentioned this place must be making a fortune so I sat quietly anticipating my awesome meal. There was music playing, which seemed very loud but I think that was because we were in the small room. The highlight of the wait, apart from the guy being a prick, obviously was the label we found on the BBQ sauce (see below photo). It made us chuckle. 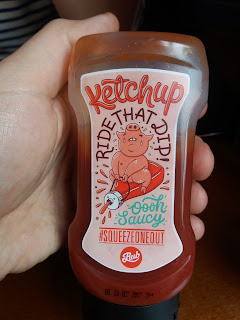 I also noticed some Franks hot sauce on the table, which I had had a conversation with a few fellow twitterers two days prior about. As I had never heard or tasted it before I was as you might expect abused by a few people who love, even the makers of Franks hot sauce got in on the action. Didn't send me any to review though, did they? No!

I immediately took a photo of said hot sauce so I could tweet it to the #Dadsquad later once I was home. 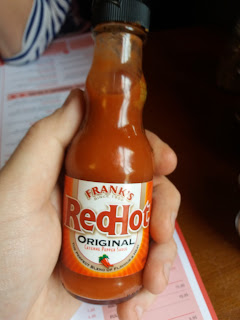 The meal came and I was disappointed. The hot dog looked nice but I was greeted with about 15 fries, it didn't even fill the plate which I was shocked at. Kerry thought her chicken looked very pink so was immediately put off. To top it off we ordered a side of onion rings. We were pushing the boat out, I don't know if I mentioned, but we hadn't been out in over four years. The onion rings came, I expected 6, maybe 8 onion rings, at least an even number so you could share. Thats not to much to ask is it? We received 3!

Three fucking onion rings! To top it off they cost me £3, that was a third of the price of my main meal. That's £1 per onion ring! Go to my local pub and you can get a cone of onion rings that has 20 in for the same price, and you get a spicy sauce with them. Now, to be fair those onion rings are the processed type but are acceptable to eat. The ones we got were "proper" onion rings and in batter. But considering that an onion actually costs about 14 pence I felt like I'd dropped the soap in a prison shower in front of Raymond the Bastard.

I never thought I'd write a paragraph about onion rings when I first started blogging.

We ordered dessert, a brownie mountain! Brilliant, this will make up for it!

Three scoops of ice cream, about six tiny pieces of brownie and 6 marshmallows and then what seemed like a full can of squirty cream with some chocolate sauce on. I love squirty cream on desserts but this was even too much for me. It wasn't really a brownie mountain, more a brownie mole hill. We couldn't finish it as the cream was too much. All in all, we spent £40 in this place and we left feeling full but bitterly disappointed.

If you're into your food challenges then this would be a fantastic place to go. It would also be great if you weren't a tight fucker like I am.

Afterwards, we went across to a pub for a drink where a local pisshead was being a twat. He fairly young and was out with his girlfriend but he had clearly been on it all day. The pub was very small so all you could hear was his pissed up ramblings. We drunk up fairly quick because he was getting on my tits.

We decided we should have just gone somewhere close by, where we could have walked to and had a few drinks and food we know is good.

It was nice to go out together and we definitely want to try it again next month but we will stay local.

Have you had an onion ring mishap lately? let me know!