on March 06, 2017
This Sunday I was blessed with a day off from work. Joseph and I both love Lego and we both love Batman so what could be better than going to see the Lego Batman movie at the cinema? Nothing that's right.

So, Sunday morning we got up, had our breakfast got ready and then realised we still had two hours to go before the film started. Damn kids getting up early.

Our film was showing at 10:45 am at our local Odeon cinema. We like going to Odeon, the cinema is fairly quiet as we have another 3 of the perceived bigger cinemas in Hull now. The main reason I don't like to go to these is that they are very expensive. I think Odeons prices are very reasonable, it cost me and Joseph £8.50 for both our tickets. 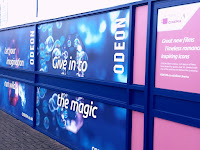 Joseph requested a kids pack, this consisted of a drink such as a fruit shoot or water, a small popcorn and some sweets. He chose Smarties as he loves them. There wasn't much choice in the sweets, it was either Smarties or something made by Rowntree and some other items I'd never heard of.  I got a drink and we made our way to the screen.

As it was early morning it was pretty quiet. Our screen was number 4, which I was happy about, not because I like the number four or I enjoy the ambience of that particular screen. I like it simply because you get to walk past at least two movie posters on the wall of upcoming films. You can't really say you've been to the cinema unless you've looked at the movie posters. I wasn't disappointed. We saw the poster for Wonder Woman and the new power rangers film. Woop.

On came the film, If you've seen any Lego films with batman in before you know he is kind of a grumpy character and doesn't like to hang around people. No, I am not batman. The film plays on the relationship between batman and the Joker. There are lots of characters in the film and most of them are I believe completely made up (who the fudge is pencil man). It had some funny parts and both Joseph and I thoroughly enjoyed it. With it being a Lego film it had lots of humour and a fair bit of it only adults would understand. When going to the cinema with your kid, you don't mind as it makes it entertaining.

Odeon cinema is always clean, the staff are always friendly and as mentioned the prices are great for the films. The prices for sweets etc are about what you expect to pay from a cinema so I can't complain. The only complaint I would have is that the screen was very cold. Cold air was blowing out from the air con units, I had to give Joseph my jacket to wrap around him as he was cold. That didn't stop us enjoying the film and enjoying the whole cinema experience though and we can't wait to go back and see Boss Baby and Despicable me 3! 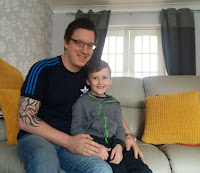