on March 03, 2017
This week Joseph had his first Karate lesson. He has been learning to swim for about 6 months but he really didn't enjoy it. Like, really didn't. I wanted him to keep learning to swim as I feel it is very important but it wasn't really fair to force him into something he hates. I wrote a post on my feelings about that, you can read it here. 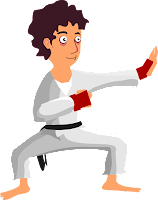 Joseph is five years old and the Karate class he goes to accepts children as young as five. We thought he would really like it so we decided to try it.

The first two lessons are free to see if they like it which I thought was brilliant. He also gets 6 weeks before he has to buy the suit. We got there and Joseph took his socks and shoes off and had a jump around whilst we waited for the other children to arrive. He seemed very excited which was a great step up from the days of him screaming and not wanting to go into the swimming pool.

The lesson started and it had 20 kids! They did a little warm u p which consisted of 10 crunches and 10 press ups. Joseph got a well done from his teacher for doing these really well. He clearly doesn't get the exercise trait from me.

They practised some punching moves and kicking moves. They then partnered up to practice punching each other. Obviously not hard, the teacher is making them understand that the technique and skill is important and that hitting their opponent hard isn't the right thing to be doing as this will score them no points in their competitions. Joseph got another well done for his punching practice. Woop Woop!

Next, the teacher paired them up as it was fighting time. At this point, Kerry pooped her pants. She didn't realise they would be doing this. They were trying to put into practice what they had just learnt. Typically joseph got paired with the biggest child who was about 7 I think. Everyone forgets Josephs age when they see his height. As it was Josephs first time you could tell he didn't really know what to do at this point as the teacher didn't really explain it to the new kids. As a result, Joseph didn't win his fight. At the end of each fight, the two children are reminded to shake hands and be respectful to each other.

Now to the best part and the part I'm most jealous of. They got to practice with nunchucks! WTF! I didn't get to do this when I used to go to karate! I toyed with the idea of Judo chopping a small child and having a go with them myself but i thought better of it.

At the end, they lined up and the teacher gave out a few packets of sweets to the children he thought had done really well. Joseph got a pack! The teacher was impressed and so was Joseph. Nunchucks and sweets! I'd of shit my pants with excitement.

Joseph said "Yeah, I loved it" when we asked if he had a good time. Phew! We're glad he enjoyed it and hopefully this is something that will teach him discipline and control and is something that he can be good at. I used to do Karate when i was little so I can show him bits at home to keep his confidence up which is the main thing for Joseph as he lacks confidence sometimes.

Has anyone else taken their children to any martial arts classes? How did they find it?