on February 17, 2017
As you can tell by the title of this post, chicken pox as hit our household.

Our boy Joseph came out in them on Tuesday. They seem to double every time you look at him. 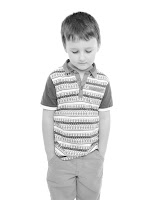 Needless to say, he is off school. As were 36 other kids in year 1 and reception the week before last! Joseph seems to be the last child to get them.

To treat Joseph we have gone with the obvious, Camomile lotion. We were also told to try the Camomile Aqueous cream as that soaks into the skin apparently instead of just creating a layer on top. He has also been having regular doses of Piriton and we have even gone with a sock full of porridge oats in the bath!

Does anyone else have any home remedies to help with the pox?

Joseph hasn't really dealt very well with having chicken pox. Last night was the worst when the itching finally began. He was screaming the house down. Kerry was trying to help him by putting lotion on but then he was screaming it was cold! You just can't win sometimes.

When he first came out with them on Tuesday he had about six on his body, fast forward 6 hours and he had about 60. It's crazy how fast they spread. Now after having them for three days, it's even worse. He has them worse. Even on his bollocks! They cover his entire back, front and are on the top of his legs and arms. He has them in and around his mouth, in his hair and has even got two on his eyeballs. Apparently, that's quite rare. Trust us to get something that's rare.

He has been to doctors today as once they get in your mouth they can travel down into your lungs etc. which we obviously, do not want to happen. The doctor said he has them inside his mouth, ON his tonsils, on the inside of his lips and on the tubes in his ears. He said it was one of the worst cases he has seen. We have a few different types of medicines and gels to try and help Joseph with the pain so, fingers crossed these work.

Alice has come down with a cold and that is supposedly the start of it. Thankfully she hasn't come out in any spots yet but we know they can lay dormant in the body for two weeks. Has anyone had an older child get the pox and not the younger one? It's going to be a lot worse if Alice does get them as she is only 16 months. #prayforus

Here's a happy photo of the two of them as I don't want to gross everyone out. 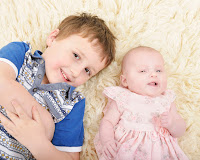