See if you can guess who it would be...
THE 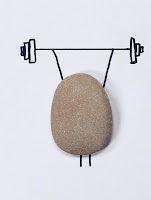 That's right, you guessed it, The Rock or to call him by his actual name Dwayne Johnson. That's an amazing likeness I know but it was the only photo I could get without needing a licence etc. I'm sure he if he was reading this he'd be happy with the likeness. Maybe add a few more weights to the photo though!
The reason I would choose to spend 15 minutes with Dwayne Johnson is that he still comes across as a genuinely nice guy, even with all the fame he has. After all, he is the biggest action star in the world right now.

I first came across him when I watched wrestling when I was younger and I found him to be hilarious! I have also seen many of his films, apart from Tooth Fairy. Seriously Rock, come on!

The guy is one of the most famous people in the world right now yet he still finds time to bring a smile to children's faces especially children who have all sorts of illnesses. His Instagram posts are all amazing. you don't see that from a lot of celebrities.

A friend of mine was recently nominated for an oscar and got to go the ceremony, unfortunately, he didn't win but he did get to take a piss in the stall next to Dwayne Johnson. That's easy a brilliant consolation prize!

I'm not too sure what I would say to him if I got the chance to meet him, probably just thanks for all the laughs you give to everyone with your movies and keep up the awesome work, and if you're ever in sunny Hull then hit me up and we'll have a beer! Maybe I'd hit him up for some gym tips as well.

Has anyone famous ever tweeted you?

Thanks for reading, see you tomorrow for day 16.