on November 05, 2016
This is probably my favourite question of the blogging challenge.

Who is your favourite superhero and why?

It has to be Batman.

The classic superhero who almost everyone in the world will have heard of.

Apart from the villains in Gotham city of course, you wouldn't do the crime if you honestly knew some dude in a bat costume would come after you.


I have seen all of the Batman films but the Dark Knight trilogy has to be my favourite so far. I think the thing that appeals about Batman is that he doesn't actually have any super powers, he is just a guy doing his bit to keep his city safe, albeit in some bondage gear, that, I'm not to fussy on.

Most people who have an interest in comics or superhero films know the back story to Batman. His parents were murdered in front of him when he was a child. His parents were wealthy and successful which made them a target. Bruce Wayne, not able to fully get over this, takes on the mantle of Batman when he gets older and decides to rid his city of criminals whilst also trying to find out who killed his parents.

I think a lot of nerds like myself, like Batman due to the fact that he is everything that most men want to be all rolled into one, Rich, intelligent, fearless, an expert in martial arts, has great detective skills and is a killer with the ladies.

I have to admit I am already most of these things 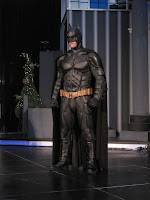 Have you got a favourite superhero? Do you have many of your superheros attributes like I do?

See you soon for day 6

Are we following each other on
Follow ?
batman comics darkknight Gotham