We got rejected by a homeless man

on October 23, 2016
I went in town with my 5-year-old son today and we had Greggs for dinner (it's a bakery if you're not from England). There was a homeless man outside and I wanted to teach my son that it's nice to do things for others where you can, I bought the man a sausage roll and asked Joseph if he would like to give it to the man for his dinner as he might be hungry. Joseph went and said "we thought you might be hungry so we bought you a sausage roll". 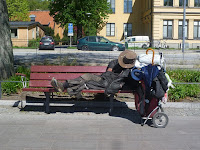 The homeless man said "no thanks"

Seriously?! Your homeless and a little boy gives you some food and you say no? It's a Greggs sausage roll for godsake not a shit sandwich with a side of shit!

Happy Birthday to me!

Getting older doesn't bother me, it happens to everyone, plus I'm still younger than a good percentage of people who might read this HaHa.

I've been thinking about things a little more since I hit this milestone. I'm no longer in my twenteens anymore, time for some proper adulting. Not adultery, adulting.

Things ive thought differently about are:

As some of you may know I'm on a diet to try and lose some weight, because now it actually enters my mind that I need to eat healthily.

I'm trying not to get so pissed off about things wrong at work.  I was told by my mate who works with me, for my own health just to chill a bit and think things through before throwing a hissy fit like I generally do. I can say in the 3 days since this advice I have successfully twice not gone mental when things haven't gone right. Its hard when you're the boss and you want things a certain way. I will then after a day, calm down and deal with the issue.

I bring you back round to the homeless guy story at the beginning of this post, normally I dont bother with these people as, to be honest it just isn't my problem, I've worked hard for what I've got. But I saw this man and my brain said it would be a nice thing to do to spend a small bit of money and get the guy something to eat.

No friggin point in that was there!

I cant believe we get rejected by someone who doesnt even have a home! Trying to explain it Joseph was a fun ten minutes ill never get back.

So, I'm trying to be healthier, calmer and more caring to other less fortunate.

Have you though differently since hitting a certain age? What are you doing differently?