Alice's Adventures! - A trip to the hospital!

Its me again, Alice. 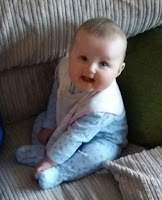 I'm not very well at the minute, in fact I've been to the hospital today :-(
Apparently I've got tonsillitis, my temperature reached 41 degrees today when i was at the doctors so i had to be taken to hospital so they could check me out. My doctor said there was nothing wrong with me, he's definitely earning his money. Loser. I did get to ride in an ambulance though, yayy!! No sirens though, booo.


My mummy was with me at the doctors and my little brother Joseph. He's really funny but also really annoying, so i pull his hair and slap him when i can, then i give a cheeky smile so that he doesn't get mad. My daddy was at work but i heard mummy on the phone to him, and she said he was coming to get us. Maybe he'll get to come in the ambulance as well? Sadly not, so he met us there. I made my mummy cry in the doctors, i didn't mean to, i love her very much and don't like seeing her sad.

I was feeling very hot in the ambulance and really tired so i just flopped on my mummy as she's really comfy. The ambulance was sooo slow because of the traffic, even daddy beat us there. The ambulance lady went to get him out of the waiting room and when he saw me he looked really worried, so i gave him a small smile to let him know i was happy to see him even though i felt like poop.

We had to go up onto the children's ward so they could see us. We had just been asked some questions by a nurse downstairs, then the same questions again another three times throughout the stay. Here's an idea NHS, why don't you talk to each other? Then you might get round more patients. Just sayin.

They kept prodding and poking me with stuff, how rude! I'm not a piece of donner meat you know! Then this nurse gave me some medicine and i nearly choked, silly mare. Two more doctors came and prodded me more! I also had some more medicine which was disgusting!

There was a cot and some toys i could play with though, good times. I had a little nap after i kicked off a bit at the doctor and slathered all over daddy's work shirt. When i woke up i felt a little better so it was time to turn on the charm. I threw out loads of smiles and lots of loud "Hiya's". My mummy and daddy were laughing at me. Daddy gave me a card out of his wallet for me to play with, sadly it wasn't his credit card, plenty of time for that though. You just wait Dad. I play this game with daddy called "he passes me something to play with and i drop it on the floor whilst his back's turned". It's really fun, you should try it some time. He gets a little stressed by this but cant get mad cause i'm super cute.

Daddy got me back though by putting a sick bowl on my head as a hat (it was dry thankfully, otherwise i'd of been really mad). I hate having things on my head but i saw my reflection in the mirror and i looked well cute. 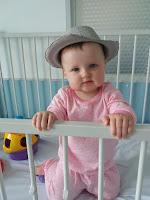 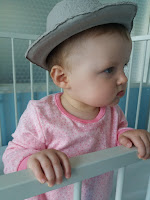 I should easily be on the next cover of vogue, make it happen someone!

So as i mentioned i have tonsillitis which sucks. My throat really hurts and i keep going really really hot. I've had my medicine again and i think mummy and daddy want to go to bed. I'm pretty tired as well, i hope i feel better in the morning.